If you live in District 17, you may be getting a copy of their newsletter by email or read it online. It includes several useful series of articles for improving your game.

You also may occasionally attend my talks on these same or more advanced subjects at Regionals. Did you know there are more detailed handouts in my downloads section which include problems to solve? The answers have been missing for a while but they are being uploaded again tonight, finally. 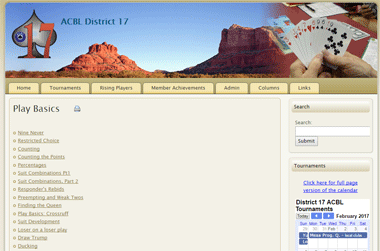 The Bidding Basics series is available also at the District 17 website under the Rising Players tab at http://www.d17acbl.org/index.php?page=bidding-basics

A more recent series is my Play Basics under the Columns tab at http://www.d17acbl.org/index.php?page=Play-Basics – I particularly like the Counting articles which feature this hand, quoted below:

John Kranyak of Las Vegas, Nevada, playing on the Fireman team, USA2, used counting in the semi-finals of the recent world championships in India. On the first board of the final set he was declaring a spade game. He needed to lose only one trick in a side suit with this combination:

Q53. The normal play, taken at the other table, is to play to the ten, hoping the jack is onside.

Kranyak opted to count out the hand first, so he played off all his side winners. He was confident that the player in front of the king who had overcalled vulnerable at the two level held the ace. He also knew that the overcaller had six clubs, one spade, and at least three hearts. His judgement from the opponents’ carding was that hearts were four-four, which left only two diamonds in the overcaller’s hand. He backed that judgement by playing to the king and then ducking to the doubleton ace on the way back.  He won ten imps for his fine play.

I give permission for any and all bridge teachers to use my published materials as long as they credit me and give the URL of this site.

1 thought on “My Basics Articles for District 17”